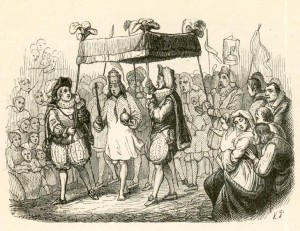 If you love poetry you may not want to read this. It might seriously undermine your power to love the next poem you read…
Remember the boy who saw the emperor on parade and cried out: “He isn’t wearing any clothes!”
In the Hans Christian Andersen tale, the emperor and his court had been conned by bogus tailors into believing that only a fool would fail to see the magnificent new robes His Majesty wore.

I identify with that boy. When I read a new poem, (especially when it’s paraded in a highbrow literary magazine) sometimes a dreadful thing happens: the beautiful garments, the magic jewels, fall off and I avert my eyes, afraid to keep reading. My fear is based on multiple cases where I valiantly tried to put the clothes back on but gave up in despair – peaking warily at the next poem in the hope of loving it fully clothed, no distressing nakedness or nightshirt.

The cause of this malady is a steadily advancing disillusionment with the word like. I don’t want this curse to strike other lovers of poetry (I suspect the condition is contagious) however I’ve finally reasoned that whistle-blowing is like garbage collection, someone has to do it and that comparison, that simile, illustrates my complaint – criticising good poets is not remotely like garbage collection. In trying to illustrate the concept of “someone has to do it” I chose a poor simile, an inappropriate image.

My distaste for like is not pure bad attitude, I admit there are times when like is justified, but this valuable four letter word cannot always do the job the writer gives it. Extravagant or weak comparisons draw attention to the device of simile and the most common word that implements it – like. Too often, like is a shortcut to riches, saving the poet re-thinking and re-drafting. Poets who wouldn’t dream of inverting a phrase out of its natural sequence to find a rhyme, liberally dress up their verse by likening almost anything to almost anything else: her hair flowed like silken snakes; he looked as puffy as mashed potatoes… Sure, the better writers avoid clunky clichés, but high degrees of inventiveness can be unnerving. There are times when I prefer a common expression to fussily brilliant originality.

Poets may not be worse offenders than writers of prose, but poems have slender sides and delicate hearts. A repetition of the word like in two or three stanzas out of four is a common and highly visible tic and unless you’re wearing special love-the-poet glasses it can offend. Once I spot over-use of the dreaded word it doesn’t grate, it doesn’t scream – it hasn’t got the guts. It bleats lamely, weakly, irritatingly.

Some poets get clever and replace the word “like” with “as”, “as if” or “as though”. This tactic might reduce the rate of like’s appearance to a mere one stanza out of four but it doesn’t dissolve the impression of lazy technique.

I belong to a writers’ group. In our workshops we adhere to the notion that criticism should be friendly and useful. It is just too easy to lean back and poke at perceived flaws. So here’s my positive suggestion to reduce simile: increase the use of metaphor and use it elegantly.

Try this challenge: Take the next poem in your path that is sprinkled with similes and mentally remove them. I don’t mean discard the imagery; I mean remove the mechanics of like/ as if/ as though. What happens? The change will probably wreck the phrasing, but how much does the poem need these words? With a re-draft could these images be deftly sewn in as metaphors? Or now that you’re up close and personal, do you find that the relevance of some similes is sliding? Perhaps they should be ditched altogether.

And what is wrong with straight out description, no upfront similes, metaphors, personifications… I declare without shame that I’m a lousy poet. I express my opinion as a reader of poetry. I buy the work of poets for heaven’s sake – I think my view counts for something.